Notes on Creativity theme of the week:
Creativity & The Divine 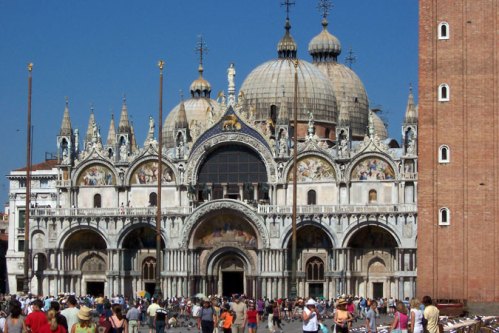 If you have ever been to Venice, you will agree that the Basilica di San Marco (St. Mark’s Basilica) is one of the most breathtaking structures you’ve ever seen. Yet, how can you reconclie the perfection of its beauty with the infamy of its past?

From the golden mosaics and dramatic arches on the outside to the overwhelming wall-to-ceiling-to-floor ornateness on the inside, not one square inch is left undecorated with Biblical scenes and geometric designs. Walking through the oversized doors, your senses are overwhelmed with the oppulence and incredible detail of the surrounding artwork- and all that gold! Built to the glory of God? Well…

In 828AD, Venice decided to position itself as a great city of global stature. It sent merchants to Alexandria, Egypt to commit grand larceny and bring back the supposed remains of St. Mark the Evangelist. Work on the grand Basilica was started to house these remains.

However, in 976, Venetians revolted against their leader, Doge Candiano IV, burning down the Basilica and murdering the Doge. Not so good.

The Basilica was rebuilt in 978, and decorative work continued for centuries to show the ever-increasing power of the Republic of Venice- and, oh yeah, to glorify God?

Two stories emerge: one the story of art to glorify The Divine, the other- which includes theft, arson, murder, and political agrandizemen- the story of man’s attempts to glorify his own interests.

Perhaps both are true stories- one so in spite of the other.

But, no grain of sand, no oyster. Wouldn’t you get bored in this Truman Show perfect world? Truman did. He wanted life with all its messiness and flaws- just make real. If it’s not as pretty as the postcard, that’s ok- you can’t breathe the air looking at the card, but can when you’re standing in the scene.

Use the comment field to suggest a topic, submit your writing on today’s 4 Minute Writer topic (Real) or to comment